I did this diptych about a month ago, but I thought I would share my process with you.  This piece actually started almost five years ago.  The model in these photos, Pete, was my first assistant that I had ever hired;  he and I both modeled together at the Academy of Art College (which was how I met him - we were both naked on a stand!), just weeks before I decided I was earning enough on my artwork to quite modeling and just be a full time artist.  Anyway, a year or two after that, I conceived of this painting, and I had Pete (who was by this time my assistant, but he also modeled whenever I needed it) do all of these poses of boys walking for the procession, which I then put together in photoshop.  At the time, I made a very long drawing, but recently, I decided to make it a painting.  I cut the original drawing in two so that each sheet could be made as a large print, and re-traced a print of the original drawing (I had sold the original long ago), and painted it in ink and watercolor.  Here are the two parts of the diptych: 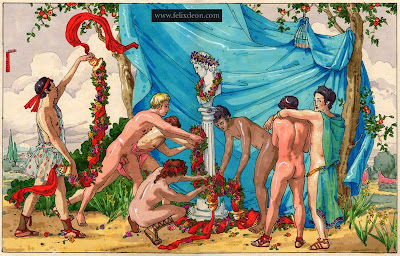 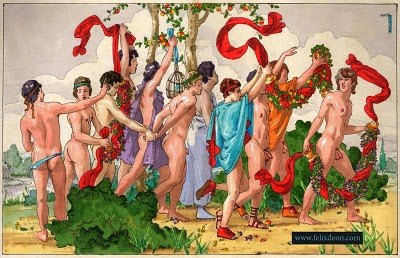 The first part of the diptych.  Here is a link to the painting
http://felixdeon.com/Hist/OfferingsForAntinous.html
and the print:
http://felixdeon.com/Hist/OfferingsForAntinousP.html
Antinous was the young lover of the Roman emperor Hadrian.  He was famed for his exquisite beauty, and he died tragically (and mysteriously) young, by drowning in the Nile.  It is unclear if his death was murder or suicide.  Hadrian was inconsolable;  he afterwards declared his young charge a god, and temples were built to him throughout the Roman Empire;  he became symbolic of gay love, and was associated with Apollo and the sun.  A great novel by Marguerite Yourcenar is about this love affair;  its one of my favorite books.  It is a deeply intellectual book, and highly recommended.  It is not really light reading;  in any case, a link follows besides this entry.

I imagined my painting as being a procession or ceremony for Antinous, which would have taken sometime in the century after his death.  I imagine it as taking place on the estate of a wealthy Roman, in the Italian countryside, who has invited his friends an the beautiful young boys of the local village to participate.  They carry flowers and caged birds, and drape wreathes around his statue.  The young nobleman is the man with the black hair and green cloak, with his arms about the shoulders of his lover, to the fare right of the upper image.


Bellow, is a photo of one of the panoramas I did when I was going to make this image.  If you compare the photo to the paintings, you can see that Pete was the model for most of the boys.  Click on the image to enlarge it, since it looks so small here.

Your art is amazing, fantastic works!