Work in the studio has been keeping me busy lately. There are fewer models in the studio (you may not have heard anything about this but as is turns out, the economy, it's not so good and the models, sadly, had to go) so I’ve been drawing more from photographs, or using my brother as a model, for often than I am used to. Luckily for me, lately things have been picking up, and some cute boys I met night before last should be coming by shortly for some exciting new drawings (and adventures, ifyouknowwhatimean) in the studio.
Gay Pride came and went, and was wonderful.
This year, I had to skip the parade. I'd meant to go, mostly so I could take some photos to share with you, but the party the night before was WAY too good and I didn’t get out of bed all day. I was tired, hungover, and the Israeli boy I brought home from the party wouldn’t have let me anyway! So between Leif, (My boyfriend – he was in bed with us too) and Eraz, my hands were tied all day (HA!! See what I did there? My hands were tied? I am so funny).

The party was thrown by the Comfort and Joy people, who run the big gay Burning Man camp across the street from where I usually camp. They throw awesome parties and last night was one of the best ever. It was held in an old theatre, and sprawled through multiple rooms. There were plays, drag queens, performances, a sex romp room, drugs aplenty, and enough hot boys to satisfy even Marcelito's considerable appetite! As always, it was a costume party. Leif took pictures of Marcelito and I getting ready: 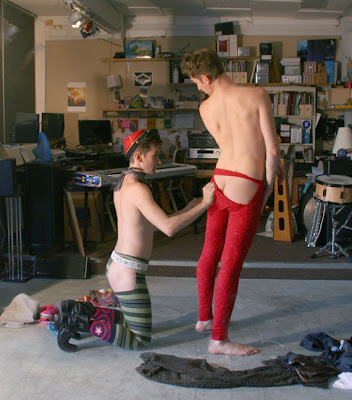 Felix and and I getting our costumes ready. 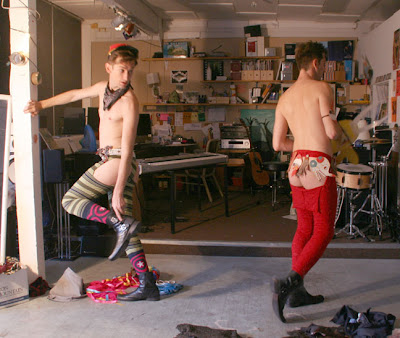 Accessories are very important. Often, they can be used to maximize your assets. 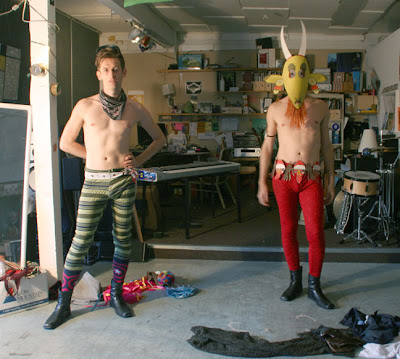 The end result. Marcelito, in costume as a person with stripey pants and a neckerchief. Yours truly, cleverly disguised as a well accessorized goat-type thing.
Leif was dressed like a big butterfly - wings and not much else. Suprisingly, we lost each other within minutes of arriving to the party. I hear later that he found a cute puppy pile to cuddle in, while I wandered around and chatted with my friends. The first time I saw Eraz perform, he was singing and dancing on one of the stages with a bunch of other boys. I couldn't tell you what a single one of them looked like, since my eyes were glued to Eraz. He’s probably 20 or so, dark skin and pale hair, and my memory will always paint him with glittery, glowing skin, since when I first saw him all he was wearing was a some applied glitter and a little pair of wings. I was smitten immediately but, like most of the men drawn to him that night, thought the situation was hopeless. I was wandering about disconsolately, feeling no other boy could do, when, to my surprise, someone grabbed me by the cock and dragged me over! (Naturally, I had lost my pants by then). It was Eraz! He demanded that I give him a blow job, and I thought it would have been rude of me to refuse. Somehow, Leif found us in the corner (maybe it was the crowd of onlookers to our little show that tipped him off)and he joined in the fun. Our coupling (or tripleing – or quadrupling, if you throw in Marcelito’s occasional hand) continued uninterrupted until this morning except for the brief stumble home, when we felt obligated to put on some clothes. I am deeply in love. This one is special and I shall probably continue to be deeply in love for at least the rest of the month.
Posted by Felix d'Eon at 2:21 PM