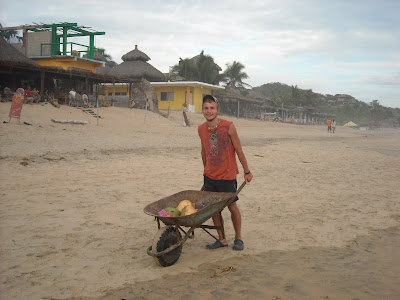 The last time I'd been in Mexico, I'd noticed a coconut seller wandering up and down the beach. He was notable for a few reasons; namely that he was young, handsome, white, and very clearly a foreigner on these Latin shores. I am possessed of near Holmes-ian powers of observation and deduction and after a four hour observation of his impressive physique, I deduced that it was unusual for a foreigner to be selling coconuts on a Mexican beach. As a budding sociologist, I thought I should continue my study of this strange behavior and in the span of three days, observed these things: All day long he wanders up and down the beach, pushing his barrel of coconuts which sell for 20 pesos (about a dollar fifty) each. Naturally, to prevent his being made uncomfortable by my scutiny, I purchase a coconut every time he comes by. Only on seven occasions have I had to chase him down the beach. As he spends the day under the tropical sun, he works up a sweat and at the each end of the beach he'll park his barrel, strip off his clothes, and dive nude into the water. Surfacing, he swims to shore and sits there, staring off to sea, naked and beautiful (while I surreptitiously take photographs), until he gets dressed again, picks up his barrel, and resumes his Sisyphean task yelling Cocos! Ricos Cocos! up and down the beach.

By the fourth day, I'd had enough of research. It was time for a more hands-on approach. I'd spent the morning of that fourth day lying on the beach sand with Ixtli, his wife, and my pretty new boyfriend, Javier, all of us uncomfortably full of coconut juice. I tried to pretend that I wasn't waiting for a chance to have a more meaningful conversation with the handsome entrepreneur but apparently, everyone on the entire beach had noticed my fascination with the coconut boy except, of course, the boy himself. Part of the problem is that his smile was so delightful I found it difficult to concentrate beyond our business dealings with coconuts.
I finally resorted to that oldest and most effective trick in the artists' manbag - I walked up to him just as he came out of the water after a cooling swim and asked him if he would model for me. Naturally, I offered to pay and it was only after his quick agreement that it occurred to me that he was probably very hungry.
He couldn't quick the coconuts just then so we waited until nearly sunset to do a photo shoot on the secluded Playa de Amor (the beach of love - clearly, something like this was destined to happen). Over a hotel dinner that evening, (and later, joints in the room while drew him) he told me a little about his East German upbringing and his travels and adventures throughout Latin America. He's seen most of the world without a penny to his name (I think it's a constant state of near-starvation that accounts for his perfectly defined and very slender body, and for the enormous quantities of food he inhaled at dinner). I learned, also, that he was looking for the Perfect Man, but had yet to find him. This came as a surprise to me because I'd assumed he was straight. While he didn't get into a lot of details about his childhood, I wondered if perhaps he'd been under-privaledged. My first clue was when we walked towards my hotel - he asked me to walk in front of him because he was afraid that if he went in first, they'd throw him out. Then, at the room, he was stunned into open-mouthed admiration of it's rich appointments. He walked around the rooms, touching furniture, tossing himself from hammock to recliner to bed and siging in exuberant luxury.
Drawing him was a pleasure - unfortunately, that was the only pleasure received from him that night. Javier, ever the attentive boyfriend, stayed by my side and kept a suspicious eye on my new friend the entire evening.
The lovely boy went back to the coconut-grove owner's porch where he sleeps for free, I lay in bed under the mosquito net with the ocean roar outside, and an insistent Javier nudging up against me, nuzzling my neck and asking in a purring Spanish if I prefer his muscles to the German boy's bones and, just then, my life was divine. 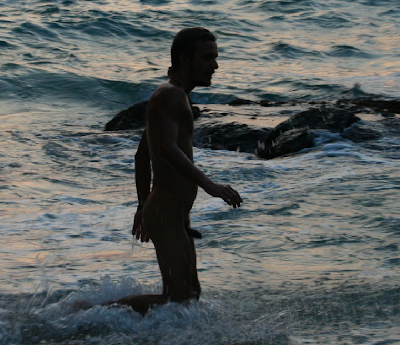 In the photo above, Mathias is modeling in the secluded Play de Amor 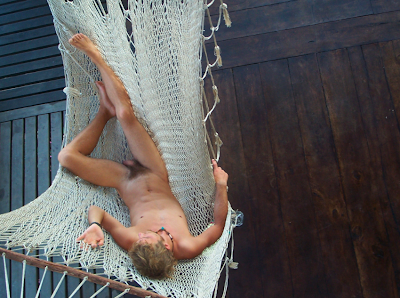 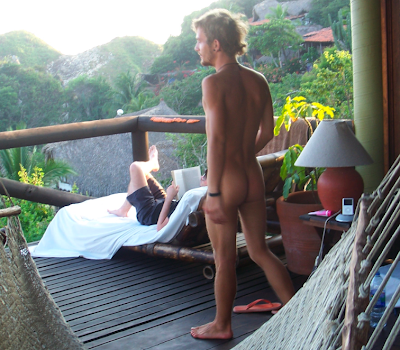 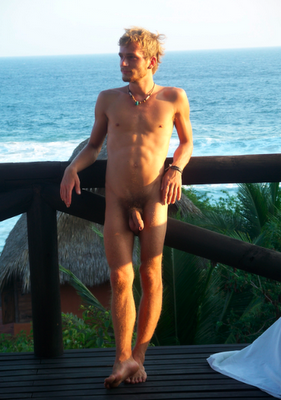 And above, in my hotel room in Zipolite.
Posted by Felix d'Eon at 1:33 PM

I'm very happy to see new posts here on your blog. Thank you! :)

Thank you! I'm sorry I went so long without, and its encouraging to hear that you like it.

Wow, yes, he is a beautiful boy. I wish him the best of luck in his travels. In some ways that really seems like a great way to see the world.

What was the name of the hotel? Im thinking of traveling to Zipolite and your hotel looks fantastic! Your room # ( if you remember) would also be helpful. Thanks in advance.

I'm a great fan of Zipo but haven't been in a few years. Please tell me the name of the hotel where the you took the beautiful photos of the coconut seller.

What shear beauty. And he does not even seem to know it.