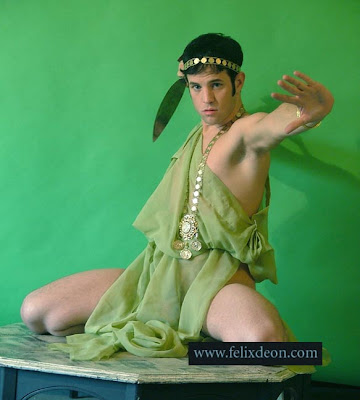 Like the flotsam on a beach after a hurricane, Marcelito's dating habits have occasionally produced very lovely, dazed young men washing up into my apartment.

Bryson is one of those survivors of Marcelito's attentions. A very cute boy from Reno, the two of us met him one night at Nob Hill Theatre, a strip club here in San Francisco (I'm not going to say what it was we were doing there, but I am sure your mothers wouldn't approve). Bryson danced all over the two of us and as we were leaving, like a begraggled puppy with a six-pack, he followed us out. The poor boy, having danced all night, was hungry so we took him out to eat, where he had two orders of pancakes with eggs and sausage, coffee, orange juice, and a side of hash browns. He'd eaten the whole thing in the time it took us to mince our way through our caprese salads. Of course, we brought him home. Marcelito and he were inseparable for a while, and I did some lovely drawings of them both.
Sadly, our time with him was short. I only had two photo shoots with him. In the first I dressed him in some transparent Greek things, and in the second he lies around the house, nude and smiling his beautiful smile (you can see more from both photoshoots on my website. www.felixdeon.com . Within a month of our meeting, he would move to Phoenix, and I would lose my chance to draw or photograph him again. He was a really sweet and beautiful boy, and I miss him. 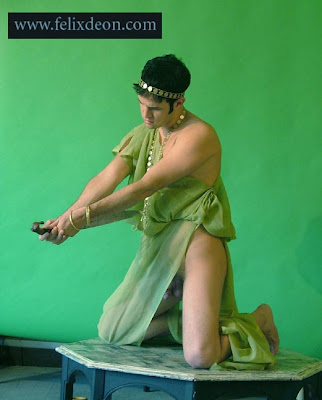 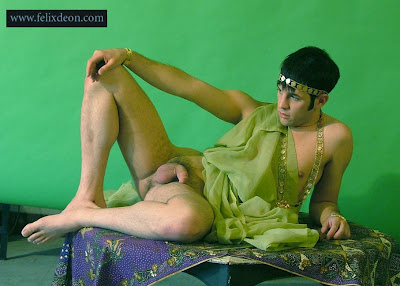 OH! I am so happy to see that you've posted again. The model is beautiful!